Steaming ahead at Dalkia biomass plant 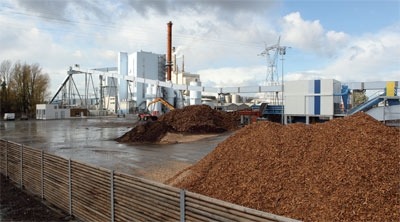 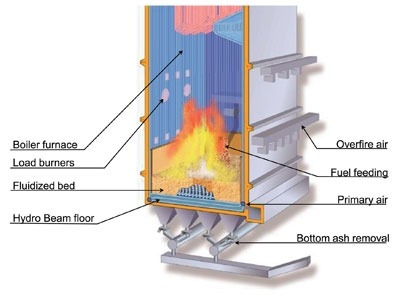 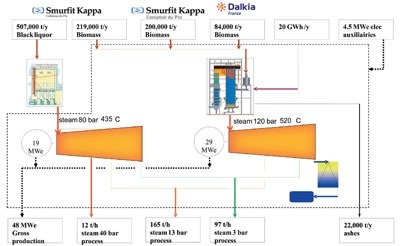 Energy services company Dalkia, owned by Veolia Environnement and EDF, has recently commissioned one of the largest biomass plants in Central Europe, adjacent to the Smurfit Kappa paper mill in Facture, near Bordeaux, in southwest France.

Representing an investment of €130 million (£115 million), the combined heat and power (CHP) facility mainly uses bark and forest residues to produce 74MW of process steam for the Smurfit Kappa mill, plus 50MW of electricity for the French national grid.

The CHP facility employs the largest biomass boiler used for energy production in France, a Hybex power boiler, from Metso. The Finnish group also supplied the flue gas cleaning, fuel-handling systems and complete automation system as part of a €60-million delivery to the project.

The Facture CHP operation is concentrated within a single plant with a control system and reporting system to manage the new power boiler. The plant’s second turbine receives the required steam from the Smurfit Kappa recovery boiler, which utilises black liquor produced in the pulping process.

As well as providing heat to Smurfit Kappa at 20% lower cost, the new system has replaced an ageing boiler that did not meet EU emissions rules and needed to be replaced anyway at a typical cost of €40-50 million.

According to Metso officials, the new boiler’s integrated set-up also provides more cost-efficient plant operation and maintenance, with a much better ratio between process steam electricity and heat than before running practically all the time in CHP mode, with a condensing mode providing just a back-up.

Truck deliveries, which come from a 100km radius, are paid on the basis of the weight and quality moisture content and calorific value of the fuel, at a typical rate of around €16-17/MWh. Plant officials estimate that this as equivalent to more than 2MWh per tonne.

According to Jouni Kinni, sales manager, power business line at Metso, sourcing of biomass is “not that easy”, but Smurfit Kappa has a powerful buying position as the Facture mill purchases 2,000kt of wood a year as feedstock for the 500kt of pulp it produces. The mill’s final product is 1.3 million tonnes per year of kraftliner paper.

The Facture power plant fuel feeding system receives ready-made wood chips, via a 500m3/h receiving facility, as well as crushed chips from an on-site fuel-preparation plant of similar capacity. The fuel is held in a covered 15,000m3 A-frame storage area, before screening and transfer by traversing screw reclaimer at 75-300m3/h to 130m3 silos.

A 1m-deep layer of sand bubbling on the bottom of the BFB furnace effectively dries and volatilises the fuel. Volatilised gases and fine fuel particles are then burned, mainly above the bed, by secondary air. Only the residual char and larger fuel particles are burned inside the sand bed.

The BFB boiler is top-supported, with fuel fed from two silos via feeding lines to four feeding chutes on the side walls. Air is supplied as fluidising air below the bed and as secondary air from the front and rear walls, with tertiary air coming from the side walls.

Within the boiler, oversized coarse material has to be constantly removed from the bed at given intervals to ensure trouble-free operation: in the BFB process, all sand or other particles bigger than 1.5mm are too heavy to be fluidised. Moreover, cumulative amounts of impurities fed into the furnace during a single day can impact on the process, Metso engineers note.

The Dalkia boiler is, therefore, equipped with Metso’s hydro beam floor, comprising water-cooled air beams and six coarse material hoppers underneath the beams. With open space between the beams, this design is claimed to provide more than 30 times as large an area for effective coarse removal as conventional designs using separate removing chutes.

Three dry, water-cooled screw conveyors located under the hoppers transport the removed bed material to the screening station, from which good bed material is returned to the furnace and coarse particles are diverted to containers.

The Facture boiler plant’s baghouse filter is based on Simatek 3CS technology and consists of four round filter units, each one equipped with 400 filter bags. A PLC-controlled, pulse-jet system can clean two bags at a time with exactly the optimum pulsing energy needed, based on a regular cleaning pressure of 0.3-0.6bar. Power consumption is less as no high-pressure air is needed.

A Metso DNA automation system, with around 5,000 I/Os, interfaces with Metso’s and other suppliers’ equipment. The redundant system covers wood handling, boiler and boiler protection, plant protection and is linked to the Smurfit Kappa system, as well as two steam turbines and the balance of the plant.

Diverse reports facilitate maintenance planning and emissions analyses, as well as updating and managing of initial data to provide authorities with information according to EU directives. Remote users have access to portal and web reports.

The aim of the combustion optimisation is to minimise both flue gas emissions and the plant’s own power consumption, as well as to optimise bed temperature by improving fuel and combustion air distributions, he added.

According to Metso, the customised automation system produces all necessary information for self-monitoring and authority/compliance reporting at Facture. Environmental applications enable a full view on emission levels to users and the authorities.

The plant is equipped to monitor emission levels on-line, including continuous in-line analyses of volumes of NOx, CO, CO2, SO2 and dust. Metso’s SNCR (selective non-catalytic reduction) system can meet NOx emission limits of 200mg/Nm3 in the system, comfortably below the current NOx emission limit of 300mg/Nm³, said Kinni.

The Facture project was 100% financed by Dalkia, which also developed and executed the project and operated the plant. However, the company is understood to have sold the plant to an equity fund that specialises in renewable energy investments.

“These investments need a long commitment by project backers, who typically must wait seven to 12 years for a return on investment,” said Jouni Kinni, sales manager, power business line at Metso. “Investors sometimes don’t want to risk money in new projects until [they are] sure that everything is running well.”

Under the French government’s CRU tendering process for electricity generation, operators have to demonstrate the technical viability of a renewable energy project. However, the main selection criterion is the price set for the production of electricity usually a closely guarded secret.

Operators want this to be a fairly low price to ensure the business case, while entering bid proposals in line with the price set by the French authorities the CRU2 purchase price was set at €110-125/MW over a 20-year period.

Metso officials estimate that electricity is sold at €120/MW compared with a typical value of €45/MW when consumed at the site. The differential means that it is clearly better to sell as much electricity as possible under the fixed 20-year contract.

The electricity price can also escalate, based on the price for the biomass and natural gas the two components for recalculation of the price year by year, said the Metso managers.

A risk for investors, though, is whether the pulp mill will survive for 20 years. Because if you stop selling the heat and produce only electricity, the efficiency and economics of the CHP operation are reduced.

Another issue is the rising price of biomass, as there is increasing competition for this forest resource. While the construction industry does not use the same materials, other applications, such as panel boards, are attracting more players to try biomass somewhere else.

“The priority is to satisfy the needs of the mill in terms of steam and heat,” said Kinni. “If they want 100%, they need to try to deliver 100%. Any surplus is also sent to the condensing turbine, and the steam then goes to the condenser only for electricity generation.”

“The plant is sized only for electricity generation. In case the mill disappeared then they would process all the steam to produce electricity. Efficiency would be low, but at least [it] could delivery [the] max to the grid, even if they don’t do it very often,” explained Kinni,
Sometimes, if paper is only fetching a low price, a mill will be stopped for months. If that happened at Facture, the power plant would produce only electricity.

The economic viability of such projects has clearly been demonstrated in the Nordic pulp and paper industry, which has been the forerunner in the use of CHP technology for 20 years. While 50MW is considered a big plant in most of Europe, 80-100MW versions are common in Nordic mills.

Increasingly, though, pulp and paper makers EU-wide are taking advantage of ’green’ electricity incentives to get a significant part of their profits from power production. At some of these sites, the power plant can be the main profit maker, industry watchers estimate.

The attraction of these projects can now also been seen at UPM, for example, with its recent projects in France, the UK UPM Shotton and UPM Caledonia and Stora Enso in Belgium.